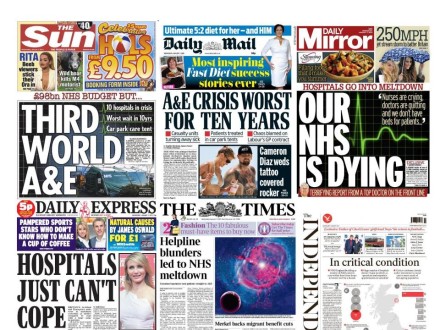 The NHS has been in the news a lot this winter. Many have expressed grave concerns about underfunding as well as increasing privatisation. Sir Simon Steven, head of NHS England, said the NHS needs £4 billion just to stand still. Despite this, we got just £350 million (not billion) for the winter crisis. This is the equivalent of just one week of the Brexit bus promise! We have then been promised £1.6 billion for 2018/9 (£2.4 billion short) and £1.7 billion for 2019/20 (£2.8 billion short).

A recent BMJ open report suggested 120,000 people have died as a direct result of Tory austerity cuts to the NHS Social Care and benefits since 2010. That is 120,000 that would still be alive if it were not for the cuts. It is not even as if austerity is working. Productivity (which the Tories kept saying would go back to 2% if we cut back) has been downgraded to 0.5%. Moreover, debts are bigger than in 2008!

Then there’s increasing privatisation with companies such as Virgin Care being awarded big and lucrative NHS contracts. Fortunately there’s fightback in a number of quarters.  Professor Stephen Hawkins has led on a big court case against the governments plans to bring multinational health conglomerates into our NHS (via Accountable Care Organisations or ACO’s).  This would allow these huge private health care companies to be given 15 year long contracts, ensuring its almost impossible for future governments to change. Professor Stephen Hawkins and his associates are taking legal action against this and so far are doing well.

What we want is a publically run and fully funded NHS and we definitely do not want an NHS run where profits go into the shareholders pockets. We need any ‘profits’ to be reinvested back into our NHS and used to benefit the British people.

We need a new government!

See the website for Keep Our NHS Public. In it’s section titled ‘Resource Cabinet’ there’s a lot of credible and up-to-date information on what is happening in our NHS.  You’ll also find information on the website about local campaigning groups if you want to get more involved in local NHS campaigns.

The Branch is actively supporting the UNISON national campaign to get fair pay for health workers. See the leaflet for more details. pay up now leaflet

DEVO MANC: future for the NHS?   £6 billion of NHS care is to be merged with Social Care Commissioning and given to the new Greater Manchester Combined Authority, run by a mayor. Taking the ‘National’ out of the NHS … Continue reading →

Enduring Values for the NHS

We need to save our NHS, and the March outside the Tory Party Conference on the 29th September is a vital demonstration to show that this country is against the privatised, dismantled, profit making NHS that is being built by … Continue reading →

March on Tory Party Conference – Save the NHS

Save the NHS! 60,000 strong demonstration in Manchester tells the Tories they are not welcome in our city! As workers within the NHS we are aware that privatisation and cuts in the NHS are driving down quality and services. After … Continue reading →

There was a much different feel to Health Conference this year than there has been in recent years.  We are now in our 6th year of the financial crisis caused by the system of Capitalism and the culture of casino … Continue reading →

Can we affect what happens to our NHS through the new Clinical Commissioning Groups?

Just Say ‘NO PP’ Some CCGs made it their policy to commission health services from the NHS, rather than private firms because of its value for patient care. So the government is tightening its hold over CCGs, and trying to … Continue reading →

Changes to Agenda for Change Agreement – for the Worse

The NHS Staff Council has agreed to alter the Agenda for Change Agreement for staff in England. Following extensive consultation with branches and members in England, UNISON voted to accept the proposals, along with the 10 other unions that represent … Continue reading →