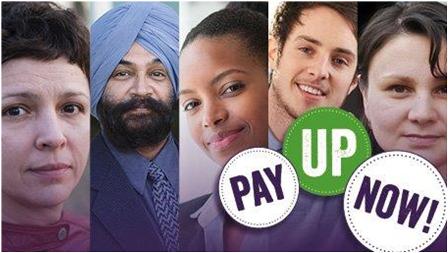 After 7 years of 1% pay freeze, Jeremy Hunt, Sec State for Health, has announced the government will no longer stick with 1%. This shows they can be moved. However, we do not know how far. They have only offered police 2%, firefighters 1.9% and prison officers 1.7% – all of which are below inflation and have been rejected by their respective trade unions.

UNISON, along with the other 13 health trade unions, are asking for 3.9% this year, which is the current rate of inflation (if you include housing costs – and only the homeless don’t have housing costs!) and means we would not lose pay this year. Plus an £800 lump sum to compensate for the losses of 18% reduced pay over the past 7 years.

UNISON is also very clear that pay rises must be for all public sector staff, not just nurses and police. And it must be fully funded. Boris Johnson recently said he thought we should get a pay rise but that this should be paid for by having less staff. Yet we are already chronically understaffed!

We are asking members to send emails to their local MP. Their email addresses are in the format – joe.bloggs.mp@parliament.uk or you can use www.parliament.uk/mps-lords-and-offices/mps to find your MP and their email and contact details as many of us don’t know who ours is.

Lobbying works. You might think these make no difference. But 3 members of a local government branch went to see Chris Green, Tory MP for Bolton West at his surgery and he changed his mind and promised he would oppose the 1% pay restraint. The more of us who email, write and see their MPs in their surgeries the more likely we are to shift them.

This is a standard letter you could use to write to or email your MP:

I am writing to ask you to support a pay rise for NHS staff which is at least inflation. Currently RPI which includes housing costs is 3.9% and we think it should be an absolute minimum that we do not lose out for another year. We have lost 18% in real terms over the last 7 years and many of us we are really struggling. Our unions are also asking for a lump sum of £800 this year to begin to compensate for the losses we have have had. We would ask you to support this too. Boris Johnson suggested this could be paid for by cutting staffing levels even further than they have been. These are already unsafe in the NHS and cannot be cut further. NHS Trusts are already predicting a winter crisis where people will die because of lack of beds and staff. These pay rises should not just be for the glamorous staff eg nurses but for all staff. We are all part of an NHS team – porters who take people from one department to another, domestics without whom we get more hospital acquired infections, and admin who make sure appointments are planned, notes are present and GPs know what changes have been planned. Nothing happens without us all.

CLICK HERE for Pay Up Now campaign video the National UNISON office has produced as well as calculator where you can work out how much money you have lost due to lack of wage rises. Let your colleagues know and share on social media.